Beach Road-Bugis area: The makings of the next tech hub?

SINGAPORE (EDGEPROP) - The transformation of the Beach Road-Bugis area is likely to accelerate with several development sites sold under the government land sales (GLS) programme and commercial buildings changing hands this year. The Middle Road site will be developed into the 375-unit The M, to be launched sometime in 2020 (Photo: Samuel Isaac Chua/EdgeProp Singapore)

The two GLS sites sold – the one on Middle Road to Wing Tai Holdings for $492 million in April, and the other on Tan Quee Lan Street to GuocoLand Singapore for $800.2 million in September – amounted to close to $1.3 billion, or about a third of total investment deals of over $3.9 billion in the Beach Road-Bugis area for the whole year.

The remaining two-thirds of investment sales in the area were of commercial buildings changing hands. They included the sale of Bugis Junction Towers for $547.5 million to Village Prop, a joint venture between US fund manager Angelo Gordon and Singapore-based investment group TCRE Partners (owned by Tower Capital Asia founder Danny Koh and Y Developments, controlled by Ben Yeo and his family). The deal was brokered by Cushman & Wakefield in early October.

At the end of October, the 342-room, five-star hotel, Andaz Singapore, which spans the top 15 floors of the 39-storey DUO Tower, was sold to Singapore-based, privately held property group, Hoi Hup Realty.

The 20-storey office block at the lower half of DUO Tower and DUO Galleria retail podium sold for $1.58 billion to Allianz Real Estate and Gaw Capital in the single largest office deal in Singapore (Photo: M+S)

July saw the 20-storey office block at the lower half of DUO Tower and DUO Galleria retail podium sold for $1.58 billion to a 60:40 joint venture between Munich-based insurance group Allianz Real Estate and Hong Kong-based private equity firm Gaw Capital. It is considered the single largest office deal this year.

“Interest from both institutional investors and developers stems partly from the transformation taking place in the Beach Road-Bugis area and partly from the dearth of office stock in the CBD core on the market,” says Shaun Poh, executive director of capital markets at Cushman & Wakefield.

The Beach Road-Bugis area has traditionally been more of a commercial district with mainly office blocks, shopping malls and hotels.

One of the most significant new residential developments in the area was the 660-unit DUO Residences at the DUO integrated development by M+S, a joint venture between Singapore’s Temasek Holdings and Malaysia’s Khazanah Nasional. Launched in August 2013 and completed in 2017, DUO Residences is fully sold, with an average transacted price of $2,042 psf, based on caveats lodged as at Dec 18, 2019. An upcoming integrated development is Guoco Midtown on the corner of Beach Road and Rochor Road, where construction is already underway. GuocoLand Singapore, which purchased the 99-year leasehold site in 2017 for $1.6 billion, intends to build a mixed development with 770,000 sq ft of office space, 219-unit residences, as well as 30,000 sq ft of retail and entertainment space.

GuocoLand, which purchased the residential site on Tan Quee Lan Street just across the road, intends to build an underground link to Guoco Midtown. This will increase its accessibility to Bugis Interchange MRT Station, as well as Esplanade MRT Station via South Beach, and Promenade MRT Station as well as City Hall MRT Interchange Station through Suntec City.

Guoco Midtown and the new site on Tan Quee Lan Street will have a combined land area of 3.2ha (about 344,445 sq ft), total gross floor area of 1.5 million sq ft, and gross development value of about $3.5 billion. 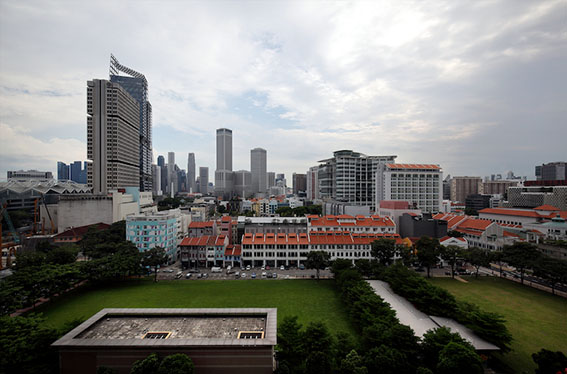 “We are now like a master developer in the Beach Road-Bugis area,” says Cheng Hsing Yao, group managing director of GuocoLand Singapore. “Integrating the two sites allows us to provide more public spaces with a seamless connection to the MRT stations. We want to be the heart of the Beach Road district – the way Tanjong Pagar Centre has become the heart of Tanjong Pagar district today.”

Across the road from Guoco Midtown and just one street away from Tan Quee Lan Street is The M on Middle Road, the upcoming 375-unit residential development by Wing Tai Holdings. The M is expected to be rolled out sometime next year.

The 219-unit Midtown Bay, the residential tower of Guoco Midtown which was launched in early October, and where prices have hit a high of $3,804 psf (Photo: GuocoLand Singapore)

The rejuvenation of the Beach Road-Bugis area, however, began long before 2019. Chris Archibold, JLL’s head of leasing, says it began more than a decade ago, when the government first sold a white site in 2007, which has since been developed into South Beach integrated development. This was followed by the historic land swap between Singapore and Malaysia in 2010, which led to the development of DUO. The third was the sale of the GLS site for the upcoming Guoco Midtown two years ago. “These three key integrated developments have a huge impact on the area,” he says.

When combined, the three integrated developments yield 1.84 million sq ft of Grade-A office space, two new five-star hotels with a total of 976 rooms, and 1,069 new residences in the enclave. 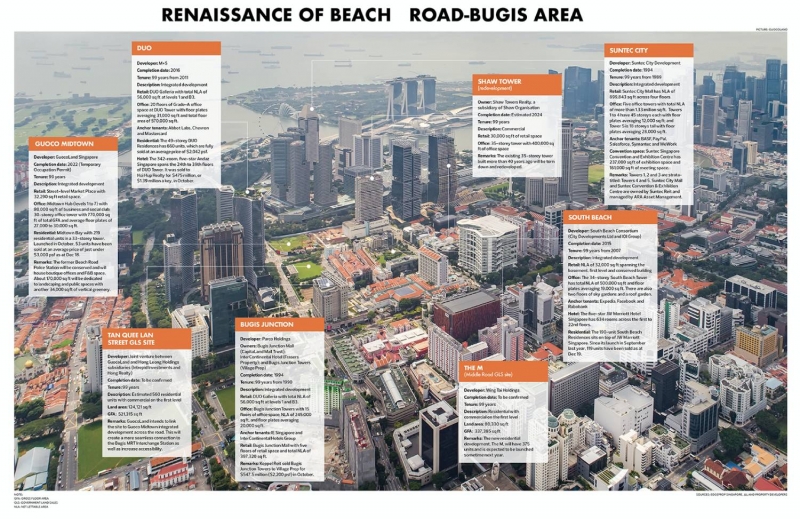 Aerial view of the Beach Road-Bugis area, recent commercial deals and upcoming developments that will shape the future skyline of the city (Photo: GuocoLand/Infographics: EdgeProp, JLL)

South Beach was jointly developed by City Developments Ltd (CDL) and Malaysia’s IOI Group. It has some half a million sq ft of Grade-A office space in one tower and the 634-room JW Marriott luxury hotel and South Beach Residences in the second tower.

The 190-unit South Beach Residences, which spans the 23rd to 45th floors of the tower, was completed in 2015 and launched in September 2018. Many of the high-floor units command views of the sea and Marina Bay, with some units enjoying an unblocked view of the F1 pit building and starting grid.

South Beach Residences was launched in September 2018 to coincide with the Singapore Grand Prix, and many of the units there were snapped up by wealthy international investors, particularly those from China. As of Dec 16, a total of 119 units have been sold. The highest price achieved was for the biggest triplex penthouse of 6,728 sq ft that fetched $26 million ($3,865 psf). 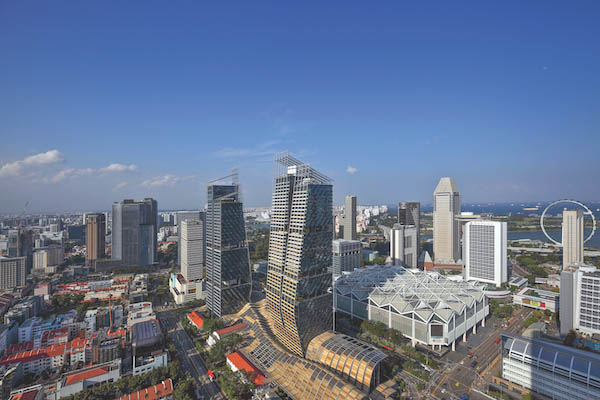 South Beach, where anchor office tenants include Facebook, Expedia and Rabobank; and where 119 of 190 units at South Beach Residences has been sold since its launch in September 2018 [Photo: Samuel Isaac Chua/EdgeProp Singapore]

With Guoco Midtown coming up next door, Shaw Tower, a relic of the 1970s, will also be torn down to be redeveloped into a new 35-storey office tower. When completed  in 2024, it will be connected to both the Guoco Midtown and South Beach integrated developments by covered overhead pedestrian bridges.

Nearby is another integrated development, Suntec City. Completed in 1997, it has five office towers, an 880,000 sq ft shopping mall (among the largest in Singapore) and Suntec Convention and Exhibition Centre. “Even before the 1990s, Beach Road has always had a commercial element to it,” says JLL’s Archibold. WeWork which opened its flagship space at Beach Centre on Beach Road is also an anchor tenant at Suntec City (Photo: WeWork)

Startups and medium-sized enterprises have also been attracted to the Beach Road area, taking up space in the new co-working centres such as WeWork, which opened its flagship WeWork Beach Centre on Beach Road in late 2017. Social media giant Facebook moved to South Beach and took up 70,000 sq ft in 2015. It has expanded so quickly that it now occupies an additional 260,000 sq ft in Marina One at Marina Bay.

What attracts these MNCs and growing tech companies is the eclectic mix of old and new in the Beach Road-Bugis area, observes GuocoLand’s Cheng. Rows of historic conservation shophouses sit alongside spanking new integrated developments with Grade-A office towers. Traditional eateries, such as YY Kafei Dian serving soft kaya buns on Beach Road, coexist with hipster joints, such as I AM café on Haji Lane serving foot-long rainbow cake.

“Besides amenities, the area has a good vibe and is accessible via public transport,” says Cheng. “That’s why I believe the Beach Road-Bugis area is where the new tech and innovation hub will be in Singapore.”

Bearing in mind the millennial workforce, GuocoLand is developing Midtown Hub, with six floors of flexible workspace and event space for companies to hold townhall meetings, brainstorming sessions and networking events within Guoco Midtown. GuocoLand is also looking to replicate the neighbouring eclectic streetscape for its public spaces to make it more conducive for people to mingle, adds Cheng.

The addition of Guoco Midtown and the new Shaw Tower will “undoubtedly make a huge difference to the area in terms of both the environment and vibrancy”, says JLL’s Archibold.

New Condos in Singapore below $799K