Ong: When I was young, my dream was to be an architect and I love interior design as well (Photo: KOP)

Located at Dalvey Road in prime District 10, the new boutique development is set within a Good Class Bungalow (GCB) enclave. It is close to the Singapore Botanic Gardens and just a short walk from the upcoming Stevens MRT station on the Thomson East Coast Line. “It’s a rare gem,” says Ong Chih Ching, executive chairman and co-founder of KOP.

In May 2018, KOP had purchased Villa D’Este en bloc for $93 million. The former Villa D’Este had just 12 units in a single block sitting on a 55,000 sq ft freehold site. “When the opportunity arose, we decided to look back to Singapore for our next residential project,” says Ong. This was because KOP’s last foray into the Singapore residential market was 13 years ago.

Even though Dalvey Haus sits on a small plot of land and is low-rise, it will not be lacking in stature, says Ong. It will have an imposing stone-clad façade of almost museum-like quality. The project is designed as an urban resort, and given its location near Botanic Gardens, it will appeal to “city slickers who are seeking a sanctuary”, says the former lawyer turned property developer. The upcoming Dalvey Haus will be be a luxury development with just 27 units (Photo: KOP)

The materials used are carefully selected for easy maintenance and will also be of the highest quality. Besides the design and quality of materials used, KOP’s award-winning hospitality arm, Montigo Resorts, will be providing “top-level concierge service” for residents at Dalvey Haus. Ong says the project will be one that “stands the test of time”.

Dalvey Haus also features spacious living, dining and entertainment areas. “Upon request, we can combine the living and dining area for those who prefer bigger spaces,” explains Ong. “We are providing a timely concept to better integrate work-and-home lifestyle.”

According to Ong, KOP’s philosophy has always been to anticipate the needs of consumers and this appeals to “sophisticated buyers who are both busy and savvy, but appreciate the finer details provided”.

Dalvey Haus is located close to the Singapore Botanic Gardens and is expected to attract 'city slickers who are seeking a sanctuary' (Photo: Samuel Isaac Chua/EdgeProp Singapore)

It is not surprising that Ong is a property developer with such a diverse portfolio today. “When I was young, my dream was to be an architect and I love interior design as well,” she says. “My favourites are hotel designs.”

Indeed, KOP has been expanding overseas into other real estate sectors including Montigo Resorts in Batam and Seminyak, Bali, as well as Wintastar Shanghai in China, the world’s biggest integrated indoor ski resort.

This comes after the group had developed and launched two freehold, high-end residential projects in Singapore more than a decade ago: The 58-unit The Ritz-Carlton Residences and the 56-unit Reignwood Hamilton Scotts, which were completed in 2011 and 2012 respectively. 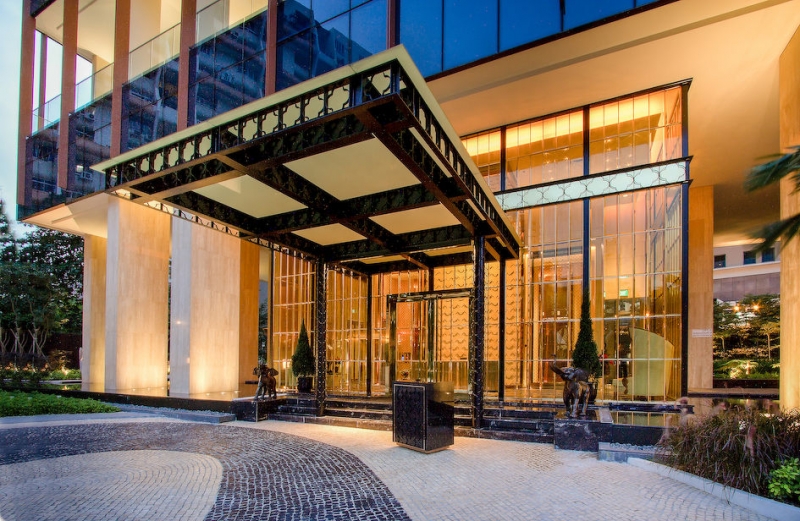 The 58-unit Ritz-Carlton Residences on Cairnhill Road was completed in 2011 (Photo: KOP)

Even though she pursued a career in law initially, Ong dabbled in real estate, buying and selling several properties. “At the law firm, we had a subsidiary called Koh Ong and Partners Management Services which provided consultancy work other than legal advice, hence the name KOP,” recounts Ong. “Nowadays, we often joke that KOP stands for King of Property”.

As a lawyer, Ong had focused on conveyancing and M&As in capital markets. Leny Suparman, KOP’s group CEO and co-founder, joined as one of the directors in the real estate advisory arm around 2005. In 2006, they came across a plot of land on Cairnhill Road and decided they could redevelop the property to cater to high net worth individuals, “as most of our clients were from the Middle East and China”, says Ong.

They invited Ritz-Carlton to manage the project, and that marked the genesis of The Ritz-Carlton Residences, the luxury hotel brand’s first such residential property outside of North America. 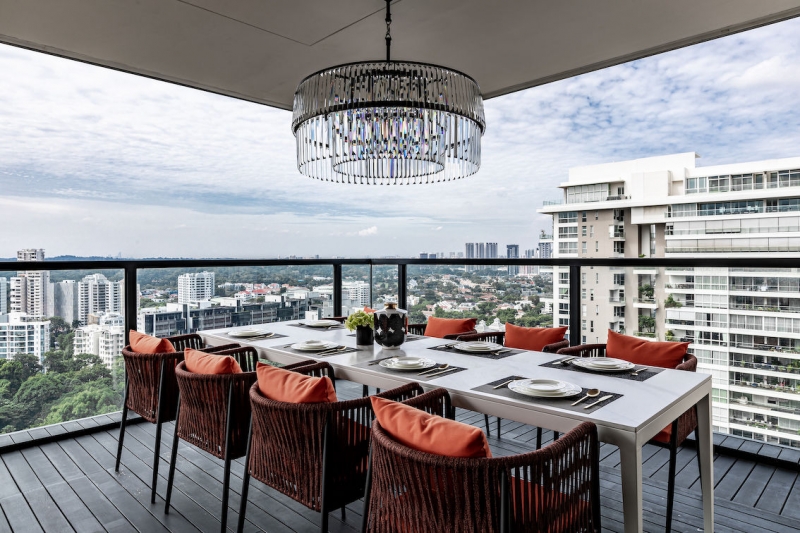 View from a balcony of a unit at Reignwood Hamilton Scotts (Photo: KOP)

They purchased another site on Scotts Road, and developed it into one of the world’s tallest residential tower, where every apartment came with a sky garage. The project was launched in 2008 and is now known as Reignwood Hamilton Scotts.

KOP also expanded into office development, with the likes of Scotts Spazio, located near Newton MRT station; and The Spazio, a refurbishment of a nine-storey building on Cecil Street into a 14-storey office tower with amenities and a luminous façade. The building at 158 Cecil Street was sold to Alpha Investment Partners, the fund management arm of Keppel Land, for $235.5 million in 2007. Alpha Investment Partners in turn, sold it to a Singaporean investor for $240 million in 2015.

Diversifying into office development was to ensure “business sustainability”, says Ong. “In total, we did four projects that year [2007] and we had raised funds from friends, ex-clients and our own pockets of course,” continues Ong. “Today, Leny and I both live in our own projects too.” In the hospitality business, there is the Montigo Resorts in Batam (pictured) and Bali (Photo: KOP)

In a bold move, KOP conceptualised, designed and invested in Wintastar Shanghai in China. “Sports entertainment will become the new integrated real estate segment,” predicts Ong. “As an ex-sportsperson myself, I know how monotonous training can be, so I wanted to provide athletes with an immersive environment while doing sports.”

At the same time, the intention was to attract tourists to Winstastar which has close to 1,000 rooms housed in two tower blocks of service residences, a five-star hotel linked to the ski slopes, and another four-star resort hotel, where guests can take the cable car to the indoor ski slopes.

In the hospitality business, there is the Montigo Resorts in Batam and Bali, which are ideal holiday destinations for all three generations of the family. “I love it when I see families holidaying there together,” says Ong. “That is why, we have a policy that when families visit as three generations, the grandparents get lots of perks as we feel that it is ‘ultra precious’ for them to bond with their children and grandchildren.” Incidentally, Montigo Resorts will also manage all the hotels in Wintastar.

“Leny and I will continue to identify gaps in the market, complement each other, and hopefully deliver awesome projects, one after another,” says Ong.