The appearance of Covid-19 cases with no known links led to the Singapore Government raising DORSCON level to Orange two weeks ago. Multiple events where crowds are expected were cancelled or postponed by the organisers.

Many people are avoiding crowded places for fear of contracting the virus. Food and beverage establishments, tourist attractions and shopping malls are feeling the pinch from the virus.
Will the property market suffer the same fate as the rest?
While we do not have 20/20 vision on how the virus outbreak will play out, we can rely on anecdotal evidence.
In March 2003, Singapore reported its first SARS case. While fear also gripped the nation, the property market appeared not to be affected. When we compared the number of units launched and sold six months before and after the first SARS case, there was little noticeable effect.
The number of units launched is 6.5% lower but the number of units sold is 12.3% higher. The superb sale performance of The M over the weekend where more than 70% of the 522 units are sold is further evidence that buyers are constantly on the lookout for superior products and the property market is more resilient than the rest. The last time such high sales figure was achieved for a project in the Core Central Region (CCR) was back “at the peak of the market”, notably in mid-November 2013 when 468 units (71%) of the 660-unit DUO Residences was sold over three days at a simultaneous launch in Kuala Lumpur and Singapore by M+S, a joint venture between Singapore’s Temasek Holdings and Malaysia’s Khazanah Nasional.

Figure 1: Impact of SARS on Property Launches and Sales 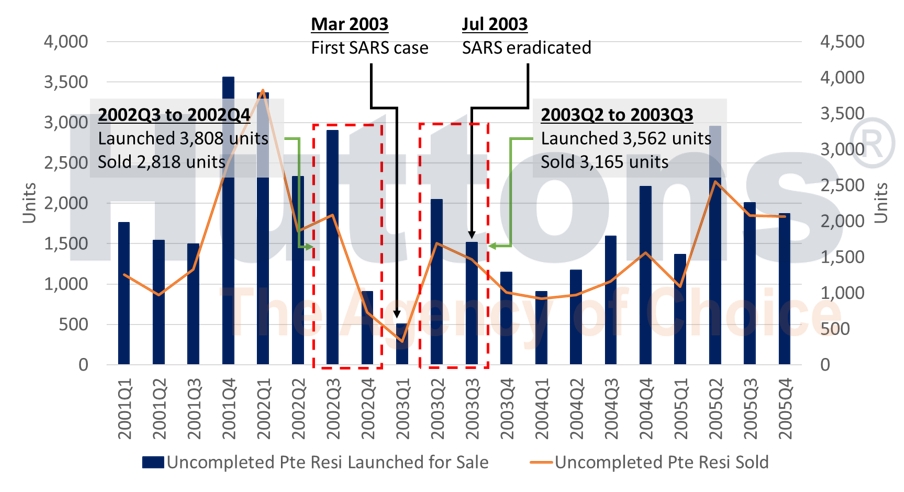 Source: URA, Huttons Research
The next question on people’s minds is whether prices were reduced to attract the buyers. From the figure below, it appeared not. If any, the property market recovered strongly after each virus outbreak. Possible reasons include economic growth, low unemployment and interest rate.
Figure 2: Property Price versus Virus Outbreak 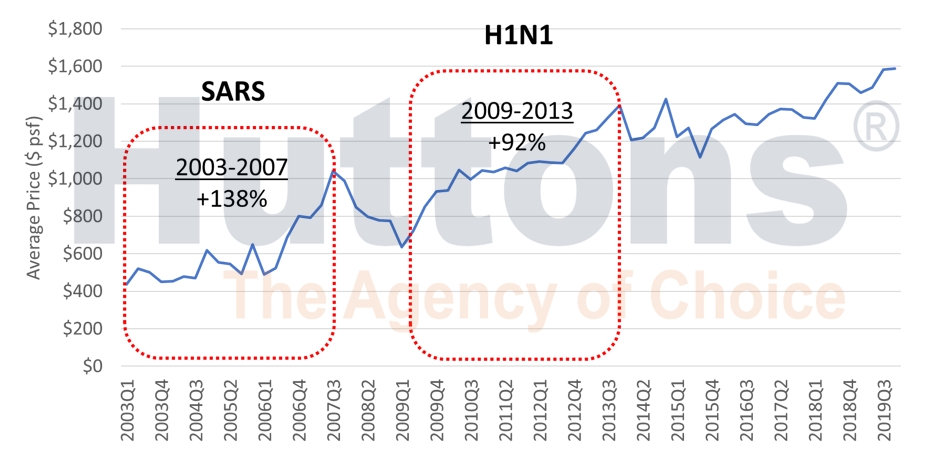 Source: URA, Huttons Research
In addition, the Singapore Government also restricted the entry of visitors holding a China passport. This raised concerns immediately because 50% of the launches in 2020 are in the CCR and the Chinese accounted for a fair bit of the buying in recent years.
However, a deeper analysis of caveats revealed a different story. Out of the 9,912 new home sales in 2019, only 1% of the buyers hold a China passport. The control over Chinese visitors is not expected to have a big impact on the property market where 80% of the buyers are Singaporeans.
Do not let fear cloud your perception. Live life as per normal, just with more hygiene practices! As what Warren Buffett once said, it is wise to be “Fearful when others are greedy and greedy when others are fearful.”
--
Information is accurate as at date of publication.
TAGS :   HuttonsGroup, OneUnitedHuttons, TheAgencyOfChoice
Investment Opportunities Huttons New Launch Portal www.huttonsprojects.com.sg
Own the Home meant for You Visit Huttons Resale Portal www.huttonsresale.com.sg