One Holland Village: Mixed-use, luxury living in a coveted area

SINGAPORE (EDGEPROP) - When One Holland Village Residences debuted on the weekend of Nov 30–Dec 1 last year, 98 units or one-third of a total of 296 units were taken up. Among the first visitors-turned-buyers was Chan Sui Him, senior director of DP Architects. As a veteran architect, Chan appreciates how One Holland Village — an integrated mixed-use development — was conceived, describing the overall design as “distinctive and uplifting”. “I am drawn largely to the sensitive architecture, unblocked views, generous space within the home and around the development,” says Chan. He likes the way light, ventilation and greenery were cleverly incorporated into the development, he explains. “This, I expect, will translate into a sense of peace and tranquillity in the living environment.” Luxury fittings include Swiss brand V-Zug kitchen appliances, Gessi bathroom fittings, Toto Neorest water closet for the master bathroom and Toto washlet for the other bathrooms. Quincy Private Residences have private lift access for every unit and concierge service. Prices at Quincy Private Residences start from $3,044 psf. The lower floors of the tower are occupied by the 255 serviced residences of Quincy House. 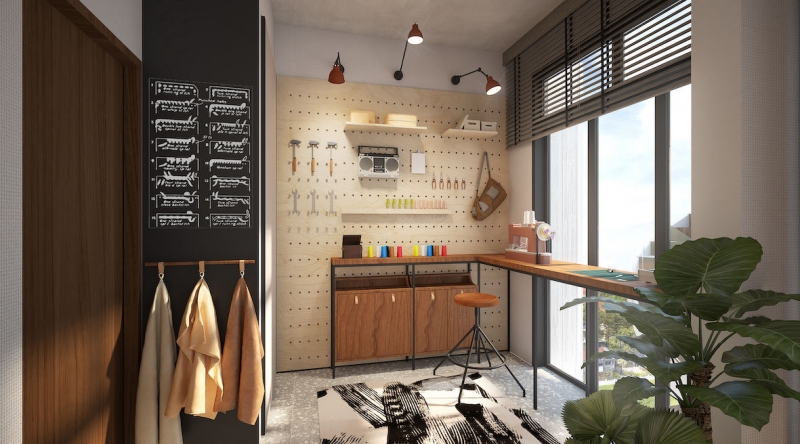 One of the two-bedrooms at the low-rise Leven which has been turned into a hobby room (Photo: Far East Organization)

Apart from Quincy Private Residences, another niche residential offering within One Holland Village Residences is Leven, with just 21 apartments spread across low-rise, three-storey blocks. The design of these apartments pays homage to the heritage walk-up apartments at Chip Bee Gardens, located across the road from Holland Village.

Units on the first level have direct access to a lawn and greenery, while those on the second level enjoy a private balcony. Those on the third level have a spiral staircase that leads to the roof terrace, reminiscent of the spiral staircases of the old Singapore Improvement Trust (SIT) flats built in the post-war era.

The apartments at Leven are two-bedders of 807 to 1,087 sq ft, and well-appointed, with top-end V-Zug kitchen appliances,  Toto washlet and Gessi bathroom fittings. Units at Leven are priced from $2,774 psf. 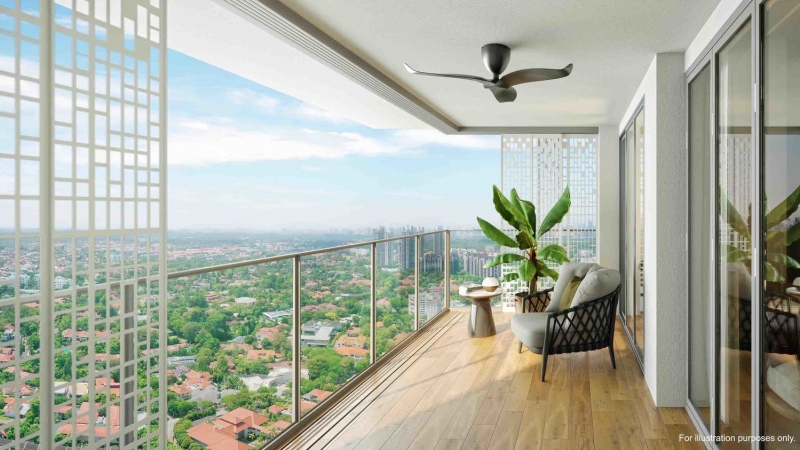 Most of the units at the high-rise Sereen tower will enjoy views of the Good Class Bungalow enclave in the Holland Road area (Photo: Far East Organization)

The tallest residential tower at One Holland Village Residences is the 34-storey Sereen. With 248 units, it offers the widest selection of apartments, ranging from one- to three-bedrooms with sizes from 484 to 1,098 sq ft. Apartments are fitted with upscale French brand De Dietrich kitchen appliances, Toto washlet and Gessi bathroom fittings.

The one- and two-bedroom apartments at Sereen tower are the most popular, says Cheryl Huan, Far East Organization COO of sales & leasing group. About 85% of home buyers who purchased units at Sereen are Singaporeans, with half indicating that they are purchasing for investment, according to Huan.

Buyers of the apartments at Leven and Quincy Private Residences are a good mix of Singaporeans and permanent residents (PRs) from countries such as Indonesia, Malaysia and South Korea. The majority of them are buying for their own use, and are attracted to the prospect of “wealth preservation and wealth transfer”, notes Huan. Artist's impression of the interior of an apartment within Sereen, which has a wide range of one- to three-bedroom apartments (Photo: Far East Organization)

Overall, 95% of the buyers at One Holland Village Residences are Singaporeans and PRs, while foreign buyers are mainly from the US, China, Malaysia and Norway. “Across the world, many are drawn to neighbourhoods that have history, personality, stylish architecture and diverse art and culinary scenes,” says Huan.

She points to London’s Shoreditch and Notting Hill as well as West Village and Brooklyn in New York as examples. Huan adds: “We expect [One Holland Village] to similarly appeal to urbanites who want to live in, and be part of, this lively enclave distinguished by quaint shophouses and streetscapes, eclectic charm and a laidback ambience.”

This is in keeping with the Master Plan 2013, where Holland Village was designated one of three “Identity Nodes” that URA seeks to preserve. It recognised that Holland Village’s eclectic character, with predominantly low-rise shophouses filled with a mix of coffee shops, bars, restaurants and various retail offerings, lends the area its charm. Hence, new developments and infrastructure built in the neighbourhood have to be sensitive to the existing environment of Holland Village. The residential zone is set away from, although it is linked to, the commercial component of One Holland Village, and there are also open green spaces within the development (Photo: Far East Organization)

There has not been a mixed-use development with private residences of such a scale in the Holland Village precinct in decades. It sits on a coveted 247,124 sq ft, 99-year leasehold site that was once a public car park. And it is the only private residential development in the Holland Road neighbourhood that can truly boast of having a Holland Village address in prime District 10.

Within the development are green, open spaces which is something homeowners will appreciate, especially since Covid-19. The residential zone is set away from, although it is linked to, the commercial component of One Holland Village. Comprising a seven-storey podium, it has three storeys of retail space totalling 145,314 sq ft, and 80,730 sq ft of office space on the upper four floors. There are also 468 parking spaces in a carpark for the commercial component that is separate from those of the residential towers, which come with their own carpark for residents.

“Mixed-use developments have become quite popular,” says DP Architects’ Chan. “However, harmonising all the different elements and creating a truly integrated yet exclusive experience for residents, tenants and visitors is challenging in reality.”

To retain the “eclectic” character of Holland Village, the consortium led by Far East Organization will curate the retail mix. There will be a Cold Storage supermarket and Guardian pharmacy at the new development.

“In the future, Holland Village will be even more vibrant and more exciting than it is today, as the developer is curating the tenants for the retail component as well,” says Siew Man Kok, chairman and founding director of MKPL Architects. “There will be a wide range of services and amenities.”

Other tenants include non-profit arts organisation The Rice Company and independent movie theatre The Projector.

“Holland Village is one of the few places in Singapore that has retained its heritage even with progress and urbanisation,” says DP Architects’ Chan. “It is endearing, with a fascinating mix of people, F&B options and a buzz that draws people from all over.”

One Holland Village has the added advantage of being located within a short walk of the Holland Village MRT Station, near popular educational institutions such as Anglo Chinese School (International), Henry Park Primary School, Tanglin Trust School and United World College of South East Asia. It is also near the growing one-north business cluster and the Orchard Road shopping district. More than 40% of the home buyers of One Holland Village are under 40 years of age (Photo: Albert Chua/EdgeProp Singapore)

Most of the home buyers of One Holland Village Residences either live around the area or frequent the area, according to Far East Organization’s Huan. Eateries in the neighbourhood include Mediterranean and Italian vegetarian restaurant Original Sin, Tiong Bahru Bakery and dessert-only café Sunday Folks.

It is not surprising that more than 40% of the home buyers of One Holland Village are under 40 years of age (between 21 and 39 years old). “They like the diverse culinary options here as well as the vibrancy and vibe that is not easily replicated in other neighbourhoods,” reckons Huan.

Even in the post-Covid era, some companies are adopting work-from-home (WFH) arrangements. Home buyers are likely to take that into consideration when choosing their units, observes Far East Organization’s Huan. The WFH trend has fuelled the desire for larger unit sizes that are well-designed, offer flexibility in terms of space and accessibility to the local social infrastructure and amenities, she adds.

In fact, the units at One Holland Village Residences are ideal as pied-a-terres — for those who want a place where they could “seamlessly work-live-play”, says MKPL’s Siew. The developer will be releasing more high-floor units at Sereen tower in the new year (Photo: Far East Organization)

Far East Organization is releasing a new phase of units on the high floors of Sereen tower in the new year. These units will offer panoramic views towards the Holland Road bungalow enclave and the city skyline. Units at Sereen have prices starting from $2,366 psf.

Buyers at One Holland Village will be entitled to a loyalty discount of up to 2% from the developer. “The healthy interest in recent property launches shows that there’s liquidity in the market,” says Huan.

Home buyer Chan says he has not decided whether to move into his new residence or to rent it out. With One Holland Village Residences scheduled for completion in 2024, he has the luxury of the next four years to make that decision.

Check out the latest listings near One Holland Village Residences, Chip Bee Gardens

Making sense of the rise in Singapore's private pr