Background
To promote a sustainable residential property market where prices move in line with economic fundamentals, the Singapore Government introduced a series of control measures since 2011. Among  them are the Additional Buyer’s Stamp Duty (ABSD), Seller’s Stamp Duty (SSD) and the Loan-to-Value  (LTV) ratio.
Entities including housing developers are subject to ABSD introduced by the Government from 8 December 2011. For housing developers, the ABSD rate is applied to the purchase price of land. While  housing developers may apply for upfront remission of the ABSD, the full ABSD sum including  interest is payable should the housing developer fails to fully sell the residential development within  five years. This is onerous on the housing developer as failure to sell the last unit means the entire profits from the project can potentially be wiped out
Table 1: ABSD Rates for Housing Developers

Source: IRAS
At the same time, the 5-year ABSD timeline altered the behaviour of developers. During the previous en bloc cycle from 2005 to 2007 and 2010 to 2012, developers responded to rising prices by  acquiring land for development. Most developers then were subject to the Qualifying Certificate (QC)  rules which gave them up to seven years to sell out their projects. The penalties for not meeting the  QC rules were less punitive than ABSD. During these periods, the uncompleted unsold stock in the  market averaged 37,000 units.
Despite uncompleted unsold stock dwindling over the next four years, developers did not enter the en bloc market to acquire more land. The more stringent ABSD rules forced developers to sell out  their existing projects before buying new land. The next en bloc cycle from 2016 to 2018 took place  five years after 2011. This happened when the uncompleted unsold stock in the market went down  to around 20,000 units.
Figure 1: Uncompleted Unsold Stock (2006 to 2020)

* Gray bars denote en bloc cycle
URA uncompleted unsold data begins from 2006 Q3
Source: URA, Huttons Research
The peak in number of uncompleted unsold units for the current market cycle was 36,839 units in Q1 2019. This is 15.3% lower than the previous peak of 43,473 units in Q2 2008. The lower peak in uncompleted unsold units is likely a response from the market to the latest round of control measures on 6 July 2018.
The number of uncompleted unsold units continued to trend downwards. However, the two months circuit breaker from 7 April to 1 June 2020 induced by the Covid-19 pandemic brought property sales  almost to a stop.
Concurrently, an outbreak in the dormitories resulted in the quarantine of almost all foreign workers and a complete halt in construction activities. To tide the industry over this difficult period, the  Government gave developers a six-month extension to the ABSD timeline subject to certain conditions.
How many units remained unsold
Just how many uncompleted units in projects with an ABSD timeline in 2020 and 2021 remain unsold?
An estimate based on published data from the Urban Redevelopment Authority (URA) showed that there are 11 and 420 unsold units in uncompleted projects which will meet the ABSD timeline in  2020 and 2021, respectively.
With new sales regaining their momentum in recent months and the six-month ABSD extension, developers should not face much problems to sell out their units. In June 2020, it was reported that  the developer of 38 Jervois managed to sell its remaining 16 units in a bulk sale, beating the August  2020 ABSD timeline.
Table 2: Estimates on Number of Unsold Uncompleted Private Residential Units (June 2020)

* based on URA Project List and published sources
Source: URA, Huttons Research as of 2Q 2020
What’s next for developers after 2020
It is possible that developers will start to buy land and kickstart the en bloc cycle in 2021. The last en bloc cycle started in 2016. 2021 marks the fifth year from 2016 and most, if not all developers would  have sold out their units. Examples of projects reaching the five-year ABSD timeline in 2021 include  Grandeur Park Residences, Seaside Residences, Martin Modern, Le Quest, Parc Botannia, Harbouview  Gardens, Margaret Ville, The Tre Ver, Jui Residences and 3 Cuscaden. Le Quest, Parc Botannia,  Harbouview Gardens and Margaret Ville are already 100% sold, well ahead of the ABSD timeline.
The last en bloc cycle started in 2016 when the uncompleted unsold units dropped to 20,000 units. As of 2Q 2020, the uncompleted unsold units stand at 27,977 units. In 1H 2020, developers have sold  more than 3,800 units. July and August developer sales are expected to be more than 2,000 units in  total. Even if the monthly sales for the remaining four months of 2020 slowed to 600 to 700 units,  developers could be looking at selling 4,400 to 4,800 units in 2H 2020 or 8,200 to 8,700 units for  2020. If the sales momentum continues in 1H 2021, the number of uncompleted unsold units will dip  below 20,000 units by 1H 2021.
A quick run through on some large developers revealed that their unsold inventories are running down and they could potentially be looking at buying more land.
Figure 2: Potential En bloc in 2021 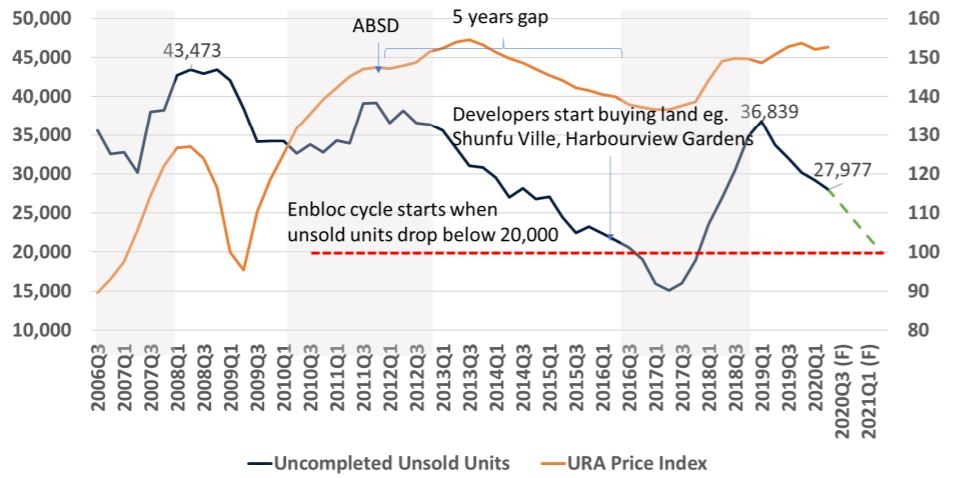 * Gray bars denote en bloc cycle
URA uncompleted unsold data begins from 2006 Q3
Source: URA, Huttons Research
Outlook
The property market has repeatedly shown its strength and resilience in spite of difficult economic conditions. With the worst behind us, the economy is expected to return to growth in 3Q 2020. The  Government has indicated its willingness to extend support to businesses and workers so that jobs,  income and demand can be preserved. Close to $100 billion has been set aside in the budget to help  Singaporeans through the crisis.
In the past few crises, buyers who entered the market early have benefitted from the recovery in prices. There are early indications that property prices may have or are in the process of bottoming out.
• The URA All Property Price Index edged up 0.3% in 2Q 2020
• Sellers are beginning to raise their asking prices
• Sustained high demand in the past few months
Buyers who are little affected in this crisis should consider searching the market for their dream homes or investment properties now. Afterall as what Warren Buffett says, “Be fearful when others  are greedy and be greedy when others are fearful”.
--
This document has been prepared by Huttons Asia for general information only. Huttons Asia does not guarantee, warrant or represent that the information contained in this document is correct. Any interested party should undertake their own enquiries as to the accuracy of the information. Huttons Asia excludes unequivocally all inferred or implied terms, conditions and warranties arising out of this  document and excludes all liability for loss and damage arising directly or indirectly there-from. All rights reserved.
TAGS :   HuttonsGroup, OneUnitedHuttons, TheAgencyOfChoice
Investment Opportunities Huttons New Launch Portal www.huttonsprojects.com.sg
Own the Home meant for You Visit Huttons Resale Portal www.huttonsresale.com.sg