Undersupply in Singapore's Property Market for the next few years

In its financial stability review released on Nov 28, the Monetary Authority of Singapore (MAS) noted that a potential oversupply of unsold private homes could bring down private residential property prices. At the same time, it warned Singaporeans to be “cautious on taking new commitments to debt-financed property and other large purchases” because of the possibility of an extended period of sluggish economic growth.
What lies behind MAS’ warning? How concerned should homebuyers be?
MAS’ financial stability surveillance toolkit comprises three measures – the Financial Conditions Index, the Financial Vulnerability Index (FVI) and Growth-at-Risk.
The FVI is a “quantity-based measure used to monitor current financial vulnerabilities relative to their historical levels by incorporating indicators across the various domestic sectors”.
Overall, the FVI for households has decreased (see Table 1) compared to a year ago. Correspondingly, household balance sheets have strengthened with liquid assets such as cash and deposits exceeding total liabilities. Loan risks have also moderated because of slower growth in household debt due to July 2018 property cooling measures.

Source: MAS
The average Loan to Value (LTV) ratio of outstanding housing loans has fallen from about 54 per cent on average in 2017 to 49 per cent in the third quarter of 2019 following the reduction in maximum LTV limits in July 2018, suggesting households (and the banks which lent to them) are more resilient to any drop in property prices, the MAS noted.
Conclusion 2: Households have a greater ability to meet their debt obligations.
Figure 1: Average LTV Ratio and Household Cash & Debt 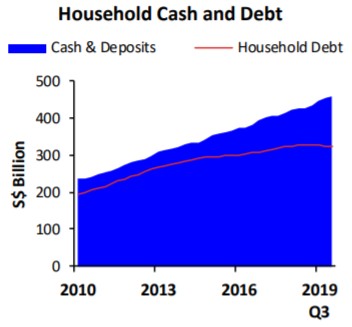 Source: MAS
MAS also concluded that the cooling measures on July 2018 have helped to bring the property market closer to economic fundamentals, which is great news for homeowners and prospective buyers.
Yet it is also not a surprise that MAS has urged caution given the uncertain economic situation and increased volume of unsold housing stock.
MAS reported that the number of unsold units from launched projects (excluding Executive Condominiums) has doubled from 2,172 units in the third quarter of 2018 to 4,377 units in the third quarter of 2019.
I would argue that this is a function of an upturn in the property market.
The chart below shows the relationship between unsold stock and the property price index. In every market upturn, the number of unsold stock in the market will rise because developers will launch more projects for sale to ride on the upswing.
If we were to compare against previous highs, the current level of unsold stock is less than half of the peak of 8,930 in the first quarter of 1998.
Figure 2: Unsold Units vs PPI 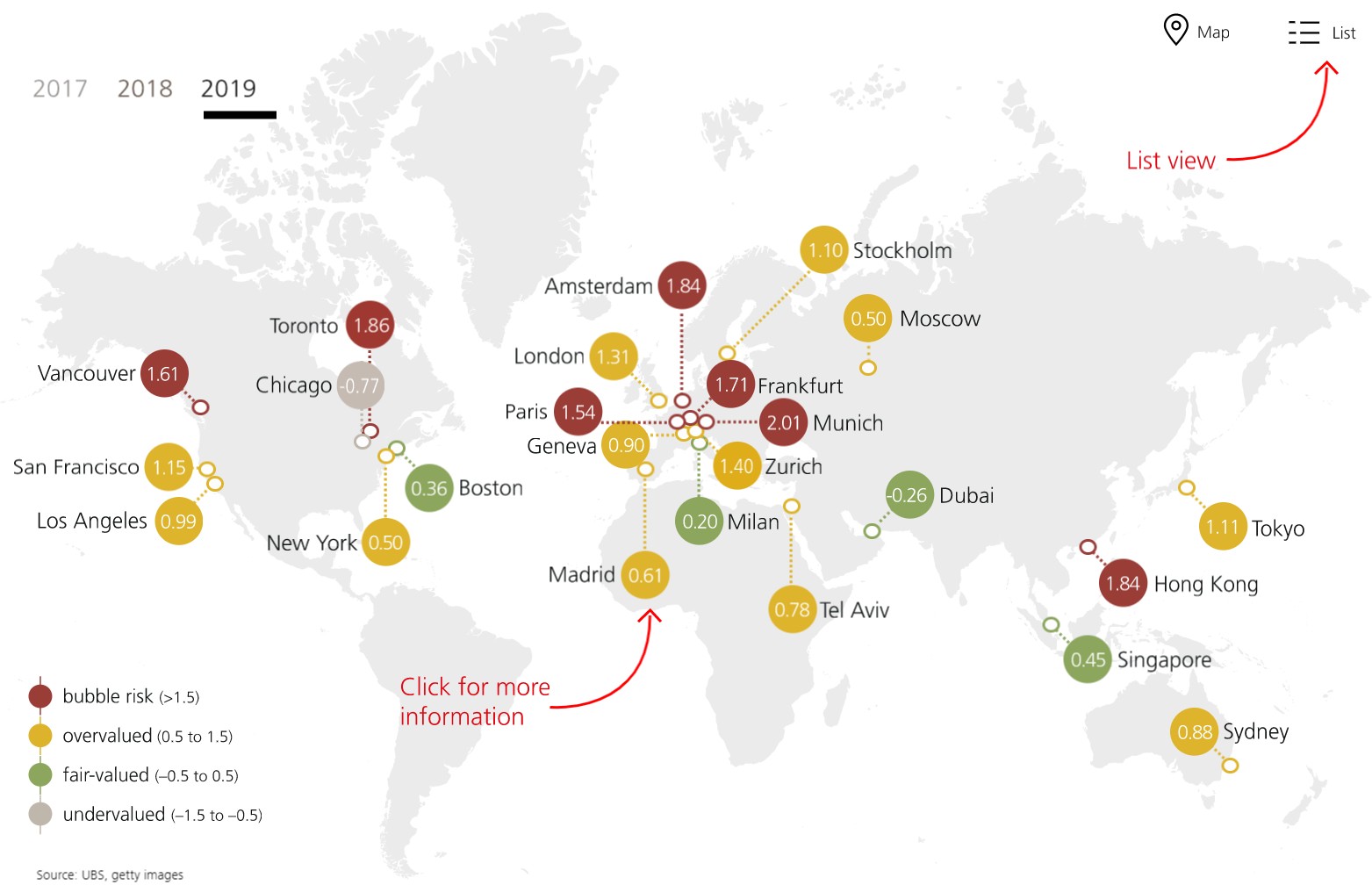 Source: UBS, getty images
Now, let’s take a look at demand for private property.
First, it is worth remembering that the en-bloc cycle (from 2016 to 2018) involved some 7,000 homeowners, some of whom could still be looking for replacement homes.
A second factor to consider is the potential growth in the population. As of June 2019, Singapore’s population is 5.7 million, an increase of more than 60,000 or 1.1 per cent over 2018’s figure. The population growth over the previous 10 years (2009 to 2018) averaged 1.3 per cent per year.
An average growth of 1.1 per cent over the next 11 years will see Singapore’s population reaching 6.43 million by 2030.
Over the past decade, the average annual demand for private homes is around 12,000 units. The supply in the pipeline based on Urban Redevelopment Authority figures is around 10,000 units per annum. If the demand stays at this level, we have potentially an under-supply in the market.
Figure 4: Under-supply in the market 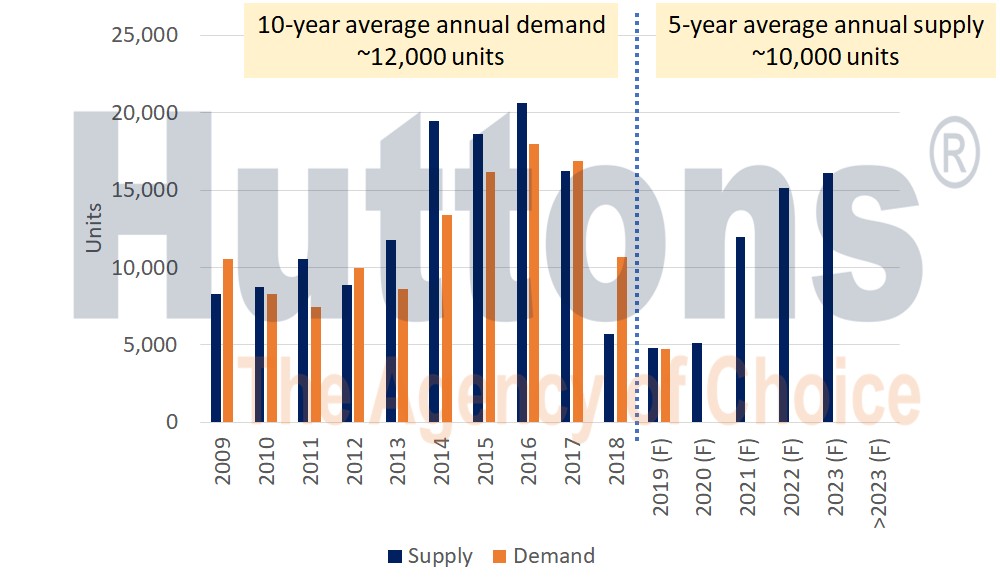 Source: URA, Huttons Research
Can the supply of homes be increased? Yes, there are two ways – through en-bloc and Government Land Sales.
The en-bloc market for residential homes has been very quiet after the Government’s latest round of cooling measures in July 2018. This means supply from this source is cut.
Can the Government increase supply? Yes, it can but right now it is doing the opposite. The number of dwelling units at 1,715 on the Confirmed List in 2H 2019 is the lowest in three years. For 1H 2020, the Government is maintaining the Confirmed List supply at the same level as 2H 2019. Supply from the Government is also curtailed.
With supply controlled and population/demand increasing, this means that property prices will increase.